Quote of the Week - Paul Graham 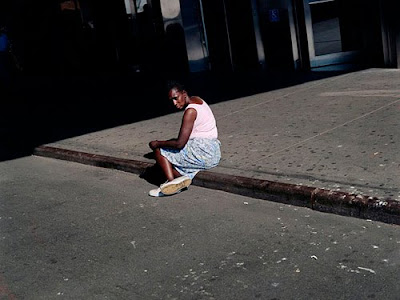 Well, really two quotes from a must read presentation over on ASX here:

...there remains a sizeable part of the art world that simply does not get photography. They get artists who use photography to illustrate their ideas, installations, performances and concepts, who deploy the medium as one of a range of artistic strategies to complete their work. But photography for and of itself -photographs taken from the world as it is– are misunderstood as a collection of random observations and lucky moments, or muddled up with photojournalism, or tarred with a semi-derogatory ‘documentary’ tag.

The point is that we need the smart, erudite and eloquent people in the art world, the clever curators and writers, those who do get it, to take the time to speak seriously about the nature of such photography, and articulate something of its dazzlingly unique qualities, to help the greater art world, and the public itself understand the nature of the creative act when you dance with life itself - when you form the meaningless world into photographs, then form those photographs into a meaningful world.

Reminds me of this:

Picasso was sitting at a table outside a Paris cafe. A woman came up to him and asked him to draw something for her on a napkin. He complied, doodling as only he could. After he quickly finished he requested the French equivalent of $5,000. Agast the woman said — “but it only took you 2 minutes!” Smiling, the great man replied — “no Madam, it took me my whole life.”
Posted by J. Wesley Brown at 1:22 PM

Is Graham also smearing documentary photography here? Does he see it is as a justified 'derogatory tag' or is he incensed because he operates on the fringes of that and has been attacked for it. (Of course, some documentary can be mere illustration).

I guess I've always been more interested in the context of an image being made - "the dance" - of a photographer so Graham's words make immediate sense.

Essentially, isn't he like any practitioner in that he wants to see fellow artists and then the larger public raise the bar of understanding and expectation?

Doesn't everyone who is passionate about what thery do want the same?

I think he's doing the opposite - defending it, no?

Funny, I've always been less interested in the context you mention. For me personally, photography is best when it is an escape, if just for an instant. It resonates most with me when I am transported into the scene presented and forget about my actual surroundings. I could care less about process at this moment.

Not everyone wants the bar raised. Some curators and those photographers who play into the system / game quite happily engage in behavior that helps perpetuate something in which they are privileged. This is why risks are not taken. This is why certain choices are made - to remain elite and to keep prices high.

But yes, the majority do want the same. The thing is, that majority are usually a minority when it comes to the elite.

If you had to name the "top 5 living elite 'art world' photogs" in terms of pricing, who would they be?

Try to examine those on that list and their practices and I think certain things become evident.

There are competitive advantages in art photography like in any other business.

Hi Wesley. I was just spurred to return to your post as it was here I first read Paul Graham's quote and now everybody's talking about it:

I apologise for my absence. I have just read Graham again and he says many sensible and actually not too novel things. His final paragraph is essentially saying what Lange said which was that she make photographs so that people can see.

Your list of photographers commanding money are unified by the primacy of process in all discussions. This ain't a bad thing and nor as Graham says, does it necessarily set up an art photography vs. everything else.

I think maybe the issue is here that those that care about photography see in Winogrand, Shore, Arbus (and I'm going to throw Vivian Maler in there too) an eye and execution that unites too many good qualities too many times to just be referred to as a single term, or considered as the products of inevitable snapping.

I would say that the combining of elements - documentary, composition, light, (decisive, eek) moment, characters, political message are things that are learnt and necessarily complex readings are successful when the subtleties are identified are found.

To a newbie to photography that sort of reading isn't easy or even possible and visually photographers of the art-documentary approach get lumped in with all the others (street, pj, enthusiast).

It makes sense - as I type - that the art world would gravitate toward the easiest and simplest (and biggest) stuff to explain and sell.

I have confidence that history will use the photographs of the OWA/FSA, of NY in the 50s and 60s, American colour photographers, and the New Topographics to describe the 20th century of America ... and not Sherman, Wall, Struth etc.

The game is still going ... and there more than two sides!

Thanks for pointing that out over on Harlane's. I commented there if you want to take a look. I definitely agree that their skills and talents are not luck and that they will be judged well over time.