It's that time of year and MOPLA is once again upon us.  Saturday's opening sees a lot of activity over at Bergamont Station, including the second Lise Sarfati show at Rose Gallery, which should be worth the trip in itself.  Be sure to check their website to see all of the programming, as there are a lot of good shows going on.


March 26th, 2012 (Los Angeles, CA)- The Lucie Foundation is pleased to announce the fourth edition of
Month of Photography Los Angeles (MOPLA), kicking off on Saturday, March 31st. This year’s theme is
Intersect: An Exploration of Innovation and Technology in Contemporary Photography, and over the
course of the month, MOPLA is presenting a series of dynamic photography programs related to the topic
of new technology. MOPLA 2012 will engage and stimulate the Los Angeles photography community via
its comprehensive slate of group and solo exhibitions, outdoor photo projections, portfolio reviews, photo
workshops, artist lectures and more. 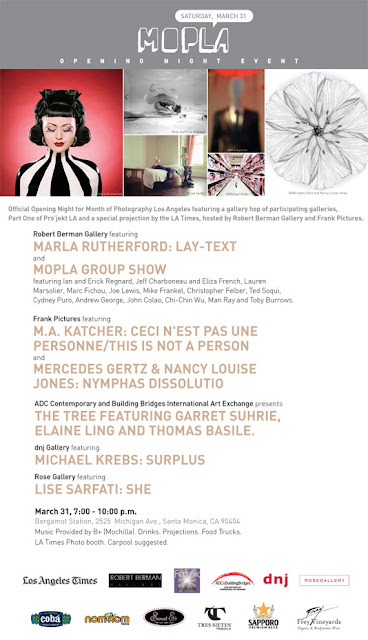 How could I possibly not tell you about Robert Adams having a show at LACMA, opening to the public on Sunday and to members today, considering he's one of the great western photographers?

There, now you know.

Also, there are drink specials for members today and tomorrow during preview days.  Sounds like a good after-work plan.

Since taking up photography in the mid-1960s as a response to the rapidly changing landscape of his native Colorado, Robert Adams has been widely regarded as one of the leading chroniclers of the American West. Edited and sequenced by Adams himself, The Place We Live surveys a career spanning four decades. This unprecedented retrospective features nearly 300 black-and-white photographic prints as well as a selection of the artist's many important photo books. Adams’s work reflects his extended dedication to describing the changing Western landscape, the growth of its built environment and the lives of its inhabitants. The Los Angeles presentation highlights Adams’s extraordinary portrayal of the terrain of the Los Angeles region. 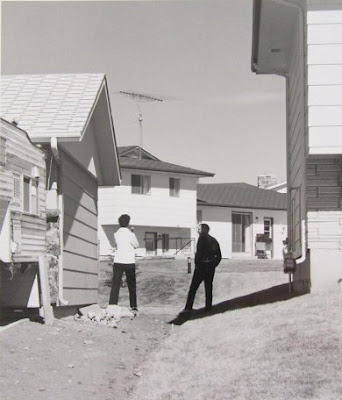 See what I did there?  I lowered expectations.  It's more likely that I'll post one a month than one a week but don't shoot me if I post a few in any given month.  It just depends on what I come across.  This week's month's isn't artspeak nonsense per se, just plain old nonsense.

“Our ideal viewer is going to come seven or eight times.”