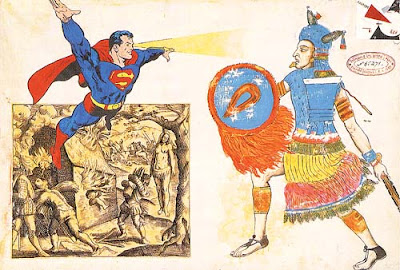 From this article by the AP:

A piece of artwork denounced as obscene by church members and allegedly ripped up by a Montana woman using a crowbar won't be returned to display because of safety concerns, city officials said Thursday.

Kathleen Folden, 56, of Kalispell, Mont., was arrested Wednesday on a charge of criminal mischief. Witnesses told police that she used a crowbar to smash glass shielding the print at the Loveland Museum Gallery and then tore part of it up.

Folden, a truck driver, told police that she drove from Montana and bought a crowbar in Loveland before going to the museum to destroy the artwork, according to an arrest affidavit obtained by The Coloradoan in Fort Collins.

Police said the damaged part includes what critics say was a depiction of Jesus Christ engaged in a sex act.

So this nutcase (the t-shirt she was wearing read "Tough as Nails") was released on $350 bond and faces penalties of up to $2,000. Who's willing to bet a religious group will happily help her out with that? In fact, her bail was posted anonymously.

So, not so bad for her. And the government gets some revenue.

And what happens to the artist, Enrique Chagoya, who is a professor at Stanford? His work gets pulled and he doesn't get reimbursed for its loss. Way to enable, Loveland Museum Gallery. So much for free speech.

If you'd like to see another, uncensored piece of Chagoya's, his Uprising of the Spirit, pictured above is on display now at LACMA.
Posted by J. Wesley Brown at 10:47 AM

Here's what I read: A woman knows of, or has seen, a piece in an exhibition she feels very strongly about, so strongly she actually goes and does something about it. I have trouble not respecting that. The fact that she ruined the piece does not seem to bother me so much.