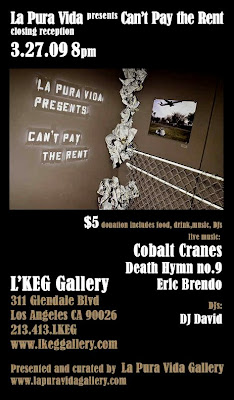 Bryan Formhals, the founder of La Pura Vida Gallery, which accepts submissions via its Flickr group was kind enough to answer some questions regarding this new endeavor and the gallery's first physical show. There will be a closing reception for the show tomorrow at 8pm, which I'll be attending if anyone wants to say hello.

How did the idea for La Pura Vida come about and why did you choose flickr as a venue to receive submissions?

La Pura Vida was born out of a small network of photographers who met through the HCSP (Hardcore Street Photography) group on Flickr, which is one of the most active groups on Flickr relating to documentary aesthetic. Ludmilla Morais, Raoul Gatepin, James Hendrick and myself were all admins of the group for about a year and half. After awhile we decided to move on because we were interested in more than just street photography.

Through numerous discussions, Raoul and I thought monthly shows would be a good way to try something different. Most Flickr groups simply maintain a constant pool of photographs which never really ends. As consumers of photography we found this approach to be rather boring.

It was around that time that I read an op-ed by Garrison Keillor in the LATimes called 'La pura vida beckons in L.A.' The name stuck with me, so we went with it.

The reason we take submissions primarily through Flickr is because we believe strongly that there's great work being created there by talented, intelligent photographers that deserves to be seen by a wider audience. Which is why we're aiming to make some of the quality work more accessible, both through our monthly shows and the regular features on the blog.

However, we'd certainly like to evolve to a point where we have submissions coming in from all over the web and not just Flickr. But Flickr does makes it really easy for people to submit photos. There are plenty of blogs out there that have pools running on Flickr seeking new work. Booooom! is a good example. Someone needs to design a cool application for art submissions on the web.

Well, I certainly agree that "someone needs to design a cool application for art submissions on the web." If the photo community could agree on a standard size, say 1000px wide at 72dpi, quality 8 jpegs also, it would sure save us all a lot of time with submissions!

Yeah, standardization would make life easier for publishers, bloggers and curators. The flow of content is too inhibited at times. I understand why photographers want to protect their work, but if you're working in the fine art community, then I think it's important to unchain your work and allow it to spread. Most fine art publishers and bloggers are non-profit entities anyway, so there's really no lose of value. Commercial publications and websites is a different story all together of course.

So you just had your first physical show. How did the opening go? Have you seen any sales in these tough times? How is the work priced and presented? Are you happy with the result? Any changes going forward based on this first experience?

My spies on the ground told me the opening went well. They even brought back a few photographs and videos as evidence. I wasn't expecting too many sales considering the audience was primarily poor and struggling, art loving urbanites. However, we did sell two photographs during the opening. But that's been it. The work was priced by the photographers with my consultation. Who knows how to value to this type of work? I'm not sure I do, which is probably not a good sign for someone presumably getting into the gallery business! I'm very curious about the 'affordable prints' model that's seemingly being adopted by a few online galleries and collectives. CONTACT editions out of the UK is the latest that I just saw. Of course, these are all based on 20x200 , which has been very successful. So it's no wonder people are copying the idea. I just really wonder how large the market is. Maybe there are more amateur photography collectors out there than we can imagine. Or maybe people will turn to affordable prints for more decorative purposes. It will be interesting to see the market evolve.

I would say overall that I'm happy with the results of the show. It was complicated organizing it remotely and I wish I had planned better and given myself more time to select the photographs, but it does feel good to get something out in the real world and off the monitors. I have some ideas for more shows but as you know wall space isn't easy to come by so we'll probably have to try some more experimental approaches. The advantage that we have is the global network we've established online. We're not tied to any specific geographical location. So, if someone in our network can find wall space in Rome, Berlin or Albuquerque, then that's where we'll go. My goal is for La Pura Vida to be a moveable feast.
Posted by J. Wesley Brown at 1:15 PM