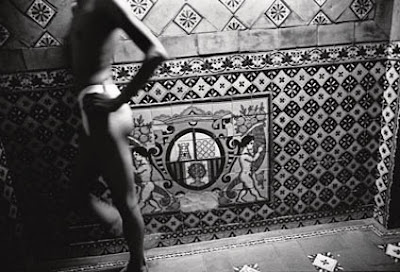 drkrm.gallery is pleased to announce the first Los Angeles exhibition of Flesh Life: Sex in Mexico City, the work of New York-based photographer Joseph Rodríguez, from February 14 through March 15, 2009, with an opening reception on Saturday evening, February 14, from 7-10 p.m.

From Nezahualcoyotl, the largest working-class suburb on Earth, to La Condesa, Mexico City’s hipster hangout, putas and putos stroll the streets, cruising for johns and surviving on their wit, born out of true desperation. These men, women, and everyone in-between are sex-workers in a country where extra-marital sex is considered a mortal sin, and, confoundingly, where they ply their trade without official reprisal. In Mexico, macho husbands consort with other men, and virgencitas are anything but.
Posted by J. Wesley Brown at 4:44 PM

It was the owner of this gallery that sent the bogus press release out canceling artwalk last summer. I wouldn't give these people a red cent! All of the money should be given to the dedicated galleries who lost money this summer due to this stupid stupid bahavior. Jay, Edgar and Bert are now the pariahs of Gallery Row. DO NO FUND.

Did anyone see their Ansel Adams LA exhibit? Or any of the last several months of fine art photography? Those shows & reputable photographers speak volumes.