Wang Qingsong at the Hammer 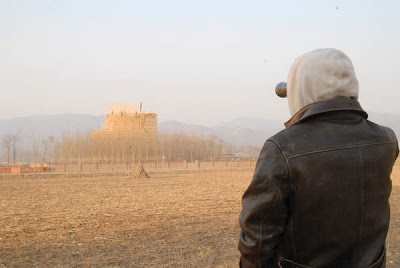 Wang Qingsong is about as big a Chinese photographer as you'll find, specializing in large scale theatrical tableaus.

Wang Qingsong is an important contemporary Chinese artist known for his large-scale photographs which explore the political, social, and cultural issues of a rapidly changing China. The Hammer is pleased to present Wang’s newest work and his first video entitled Skyscraper (2008, 35mm, 5 minutes). Over the course of a month, employing 30 scaffolding workers from the poor countryside outside of Beijing, Wang built a 35m high “skyscraper.” Using stop-action 35mm film he captures the entire process but without the workers visible. You will be witness to a gleaming golden structure rising, as if by magic, out of a barren landscape reaching for the ever-shifting blue sky.


The Hammer is free on Thursdays.
Posted by J. Wesley Brown at 11:32 AM

whoa, yeah, when are we going? this guy is amazing