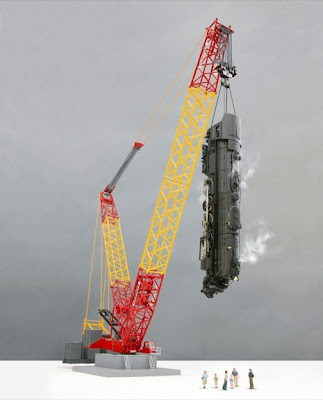 This has been commissioned by LACMA and will be the most expensive piece of art ever made...

From an article in the Times of London:

Now the American artist Jeff Koons is building one of the world’s most expensive artworks – a 161ft sculpture of a crane hauling up a reproduction steam locomotive.

In the March issue of The Art Newspaper, Koons is quoted as saying: “We’re talking of a $25m [£17.6m] work.” The cost of buying, building and constructing was confirmed by the director of the museum.

“This Koons work sounds absolutely extraordinary,” said Antony Gormley, sculptor of the Angel of the North, which cost just under £1m.

According to reports from Los Angeles, Koons has been inspired by the elegance of the old engine and “its sexuality”. This means the artist is keen for the train to “perform”.

Three times a day the engine will be started, steam produced and the wheels will start to move. “It will accelerate faster and faster until it reaches an orgasm,” said Koons. “Then, it will lose its speed while the last drops of steam come out.”
Posted by J. Wesley Brown at 2:16 PM

Is this saying that we can pay for a $25 million dollar piece of art but we can't pay our teachers or buy books.

Well, it doesn't exactly work that way. It will be purchased with funds that are restricted to art acquisitions so those funds couldn't even be used to pay the museums electricity bills or salaries. It won't be purchased with county money.

Sad thing is to really fully enjoy it, I think you'll probably have to be down a street or two to get the full perspective of the art in relation to the surroundings. Anyone know how tall this thing is gonna be ?

Well, with all the cranes collapsing in NY, I'm not sure it will actually ever be built. LACMA won't want it falling down on someone.